And tsunami stone monument referred to is that of the tsunami that has reached up there by the characters, etc. to carve in stone or carried to the shore by the tsunami triggered by the earthquake, etc., was launched on land. There is also a place that is the subject of faith, not only to tradition the fear caused by the tsunami.

A stone tablet in Aneyoshi, Japan, warns residents not to build homes below it. Hundreds of these so-called tsunami stones, some more than six centuries old, dot the coast of Japan.

ANEYOSHI, Japan — The stone tablet has stood on this forested hillside since before they were born, but the villagers have faithfully obeyed the stark warning carved on its weathered face: “Do not build your homes below this point!”

Residents say this injunction from their ancestors kept their tiny village of 11 households safely out of reach of the deadly tsunami last month that wiped out hundreds of miles of Japanese coast and rose to record heights near here. The waves stopped just 300 feet below the stone.

“They knew the horrors of tsunamis, so they erected that stone to warn us,” said Tamishige Kimura, 64, the village leader of Aneyoshi.

Hundreds of so-called tsunami stones, some more than six centuries old, dot the coast of Japan, silent testimony to the past destruction that these lethal waves have frequented upon this earthquake-prone nation. But modern Japan, confident that advanced technology and higher seawalls would protect vulnerable areas, came to forget or ignore these ancient warnings, dooming it to repeat bitter experiences when the recent tsunami struck.

“The tsunami stones are warnings across generations, telling descendants to avoid the same suffering of their ancestors,” said Itoko Kitahara, a specialist in the history of natural disasters at Ritsumeikan University in Kyoto. “Some places heeded these lessons of the past, but many didn’t.”

The flat stones, some as tall as 10 feet, are a common sight along Japan’s northeastern shore, which bore the brunt of the magnitude-9.0earthquake and tsunami on March 11 that left almost 29,000 people dead or missing.

While some are so old that the characters are worn away, most were erected about a century ago after two deadly tsunamis here, includingone in 1896 that killed 22,000 people. Many carry simple warnings to drop everything and seek higher ground after a strong earthquake. Others provide grim reminders of the waves’ destructive force by listing past death tolls or marking mass graves.

Some stones were swept away by last month’s tsunami, which scientists say was the largest to strike Japan since the Jogan earthquake in 869, whose waves left sand deposits miles inland.

Aneyoshi’s tsunami stone is the only one that specifically tells where to build houses. But many of the region’s names also seem to indicate places safely out of the waves’ reach, like Nokoriya, or Valley of Survivors, and Namiwake, or Wave’s Edge, a spot three miles from the ocean that scholars say marks the farthest reach of a tsunami in 1611.

Local scholars said only a handful of villages like Aneyoshi heeded these old warnings by keeping their houses safely on high ground. More commonly, the stones and other warnings were disregarded as coastal towns grew in the boom years after World War II. Even communities that had moved to high ground eventually relocated to the seaside to be nearer their boats and nets.

“As time passes, people inevitably forget, until another tsunami comes that kills 10,000 more people,” said Fumio Yamashita, an amateur historian in Iwate Prefecture, where Aneyoshi is situated. He has written 10 books about tsunamis.

Mr. Yamashita, 87, who survived the recent tsunami by clinging to a curtain after waters flooded the hospital where he was bedridden, said Japan had neglected to teach its tsunami lore in schools. He said the nation had put too much store instead in new tsunami walls and other modern concrete barriers, which the waves easily overwhelmed last month.

Still, he and other local experts said that the stones and other old teachings did contribute to the overall awareness of tsunamis, as seen in the annual evacuation drills that many credit with keeping the death toll from rising even higher last month.

In Aneyoshi, the tsunami stone states that “high dwellings ensure the peace and happiness of our descendants.” Mr. Kimura, the village leader, called the inscriptions “a rule from our ancestors, which no one in Aneyoshi dares break.”

The four-foot-high stone stands beside the only road of the small village, which lies in a narrow, cedar-filled valley leading to the ocean. Downhill from the stone, a blue line has been newly painted on the road, marking the edge of the tsunami’s advance.

Just below the painted line, the valley quickly turns into a scene of total destruction, with its walls shorn of trees and soil, leaving only naked rock. Nothing is left of the village’s small fishing harbor except the huge blocks of its shattered wave walls, which lie strewn across the small bay.

Mr. Kimura, a fisherman who lost his boat in the tsunami, said the village first moved its dwellings uphill after the 1896 tsunami, which left only two survivors. Aneyoshi was repopulated and moved back to the shore a few years later, only to be devastated again by a tsunami in 1933 that left four survivors.

After that, the village was moved uphill for good, and the stone was placed. Mr. Kimura said none of the 34 residents in the village today know who set up the stone, which they credit with saving the village once before, from a tsunami in 1960.

“That tsunami stone was a way to warn descendants for the next 100 years that another tsunami will definitely come,” he said.

For most Japanese today, the stones appear relics of a bygone era, whose language can often seem impenetrably archaic. However, some experts say the stones have inspired them to create new monuments that can serve as tsunami warnings, but are more suited to a visual era of Internet and television.

One idea, put forth by a group of researchers, calls for preserving some of the buildings ruined by the recent tsunami to serve as permanent reminders of the waves’ destructive power, much as the skeletal Atomic Bomb Dome in Hiroshima warns against nuclear war.

“We need a modern version of the tsunami stones,” said Masayuki Oishi, a geologist at the Iwate Prefectural Museum in Morioka.

Despite Aneyoshi’s survival, the residents are in no mood for rejoicing. Four of the village’s residents died last month: a mother and her three small children who were swept away in their car in a neighboring town.

The mother, Mihoko Aneishi, 36, had rushed to take her children out of school right after the earthquake. Then she made the fatal mistake of driving back through low-lying areas just as the tsunami hit.

The village’s mostly older residents said they regretted not making more of an effort to teach younger residents such tsunami-survival basics as always to seek higher ground.

“We are proud of following our ancestors,” the children’s grandfather, Isamu Aneishi, 69, said, “but our tsunami stone can’t save us from everything.” 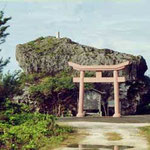 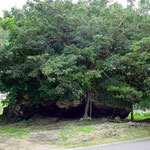 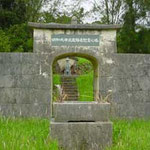 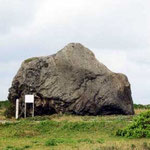 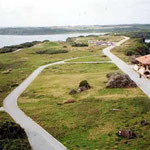 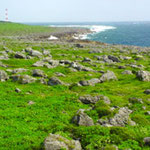